Posted on November 2, 2011 by Natalie Muccillo 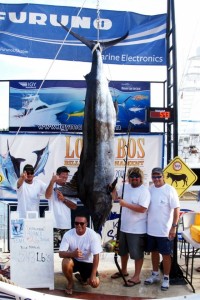 The docks of Cabo San Lucas were buzzing with competitors who turned out October 11-15 for the 13th Annual Los Cabos Billfish Tournament. The big winner of this event was Team Chupacabra, who reeled in a 543 pound blue marlin, pictured here. There isn’t anything quite like seeing those numbers flash up on the ScaleMaster Scoreboard and knowing you got the big catch of the tournament, right guys?