After a last minute change in venue, the Zane Grey Invitational, the first tournament to kickoff the California Billfish Series presented by Typhoon Polarized Optics, began with a move to Dana Point. The striped marlin everyone was looking for weren’t biting off Catalina. The decision was made, and everyone in the tournament agreed, it was the right call.  Shark’s Parlour was the victor in this tournament, taking close to $80,000 in prize money. 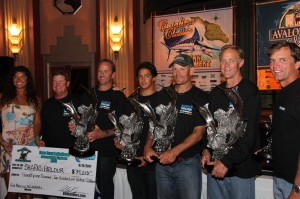 The team on Shark’s Parlour, including Jim Sloan, Tom Sloan, Eric Hermann, Bryce Hermann, Rick Triguiero and Jesse Henry took the lead on Day One and held the position the entire event.

Fishing continued on Catalina Island on September 18-20 with the Catalina Classic and the Avalon Billfish Classic running simultaneously. Fishing was tough for all of the participants, and with no one landing a fish; a decision had to be made as to what to do with the prize money.

With no fish caught in these two events, Hussainy decided to roll the prize money over to the 2012 events and give back all of the optional jackpot cash minus the tournament’s operational cut. It was either that or fish for one more day. It was a popular decision with the participants.

Quotes and pictures courtesy of http://www.catalinaclassic.com/