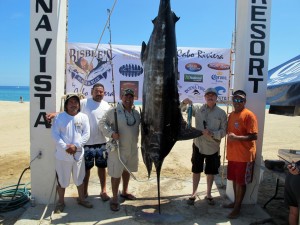 Bisbee's record marlin at the weigh-in

Bisbeeâ€™s East Cape Offshore came to a close on July 31st with a new record for the books. A very nice run was seen by the 61 boats that entered the tournament in its now 12 years of competition. Chucky Van Wormer caught a marlin weighing in at 557lbs and was the only marlin to qualify to be weighed. That catch netted Mr. Van Wormer $238, 569.

The fish totals for the tournament were 39 blue marlin, 38 striped marlin, 2 black marlin, and 26 sailfish bringing the overall total at 105 billfish.

“It’s been a great way to kick off another tournament season here in beautiful Baja. We had a near-record field of boats, some great anglers and cooperative weather… everyone is tuned up and ready to go for the rest of the season, and I’m sure it’s going to be a good one,â€ Wayne Bisbee said on the Tournamentâ€™s website.

Bisbeeâ€™s next tournament is the Los Cabos Offshore October 18-22 in Cabo San Lucas.

Information, quotes and picture courtesy of www.bisbees.com. For a complete list of Standings and other top fish weighed, please go to their website.