Grander Caught On A ScaleMaster 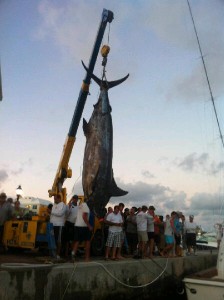 It was a frantic phone call, late in the day here in San Diego, on May 30th from Bermuda. No names were exchanged, but I could hear a lot of noise & commotion in the background. The caller frantically said his Scale Master was reading overload as they were trying to weigh a fish. What could he do? He sounded intent, on edge. We determined he had a Scale Master II, one our dual range tournament scales, and that he had it in the low range. Easy fix. In this case, they were weighing something over 200# and needed to switch the scale into the high range. I told him to press the range button to get rid of the decimal point. After that, all was good and we signed off. I could hear the relief in the callers voice. All in a days work and I was happy IWS-ScaleMaster was available for Customer support at any time.

The next day, going thru my Facebook feed, I read a story about the 10th Grander of the year weighed in Bermuda via granderwatch.fishmonster.com. We at IWS are always interested in the triumphs that take place in the fishing world; whether for World Records, tournaments or recreation. I read the article of this epic 1289# Blue Marlin. Then the light bulb went off! This was THE fish the frantic caller was trying to weigh the day before. The photos showed what a big beauty this was and how it dwarfed the Bertram Seafari. I saw the ScaleMaster II in its yellow case in the posted pictures and video from SaltWater Sportsman this was the scale that weighed the Blue Marlin!

I guess the moral of this self-promoting story is don’t leave the dock without a Scale Master and if you do.make sure the dock, marina, weigh station or another Captain has one when you pull back in. You just never know when you are going to need a Scale Master! 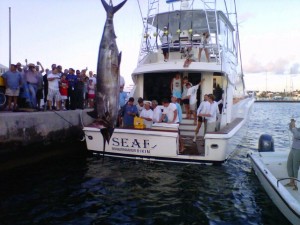