Tournament Fishermen Hook Up With Conservationist 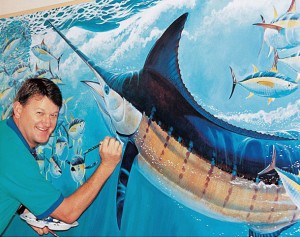 If you have had any contact with the world of fishing, Guy Harveys name or artwork has most certainly come across your radar. While he is well known in the fishing community for portraying beautiful wildlife on canvas, he has also known for the conservation work he does to ensure wildlife survival. Fred Garth interviewed Mr. Harvey recently, and Guy gave some important information on how tournaments can ensure safer practices for the fish they are catching.

To answer this question let me use the example of a tournament called the White Marlin Open held in early August every year in Ocean City, Maryland. About 1,000 white marlin are caught in the event, mostly on bait. The survivability studies (by Dr. John Graves at VIMS) have shown that approximately one third of all white marlin caught on bait with J-hooks die after being released. That will be approximately 330 white marlin per tournament. The study also showed that 99 percent of white marlin survived being caught on bait rigged with circle hooks. The legislation governing how we fish for billfish when using bait has changed because of this study. Survivability is very high when using circle hooks compared to J-hooks. So, what is the single most important factor? Everyone should use circle hooks.

As seen in Guy Harvey Magazine. To read the interview in its entirety, please go to www.guyharveymagazine.com.
Photo courtesy of guyharveysportswear.com